There are many family trees posted to the big genealogy websites.  My personal opinion about these trees, in relation to my own research, is they should be used a hints.  I always try to contact the tree owner to see if they have any sources of their information.  I am cautious about the online trees but I am also optimistic.

Towards the end of the summer, I received a hint about my grandfather’s family on My Heritage.  I took a look at the family trees posted and noticed a sister named Anastasia Adele Ciardonei was part of the family structure.

My grandfather, Celio Capelli, immigrated to the United States in March 1920 at the young age of 5 after the death of his mother, Adele Siletto.  Upon the ship’s arrival in New York, my great-grandfather, Matteo Ciardonei, was detained at Ellis Island after being diagnosed with tuberculosis.  My grandfather’s aunt (Adele’s sister) Mary Siletto Capelli, traveled from Pittsburgh, Pennsylvania to pick up my grandfather from Ellis Island.  Matteo was deported back to Italy and Celio became part of the Capelli family. Sadly, Matteo passed away a little over a year later in Cossano Canavese, Italy.  My grandfather grew up in Pittsburgh in the home of his Aunt and Uncle, Mary and Frank Capelli, with his cousins as his siblings.

I had heard a story that Adele Siletto had passed away in childbirth.  I considered this story very likely to be true.  When reviewing the family trees at My Heritage, it seems I had finally might have proof of this story.

I contacted a friend on Facebook, Lily, who lives in Cossano Canavese, Italy.  You can read about how we were introduced and the wonderful presents she gave to me here.  I had received the church death record for Adele Siletto from Lily last year.  What I did not know at the time was to ask if there were any records for this possible sister, Anastasia Adele.

I asked Lily to take another look at the church records to see if there was a birth record for Anastasia Adele Ciardonei in the same month Adele had passed away.  Lily became my hero once again when she sent a digital copies of Adele’s death record and Anastasia’s birth and death records. 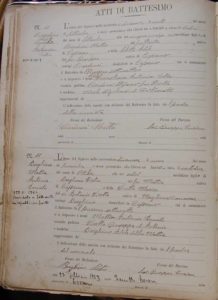 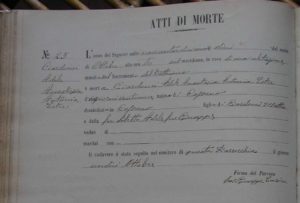 My heart breaks for Matteo Ciardonei.  In less then a year he loses his wife and newborn daughter, tries to reach a better life in America but is deported, and leaves his son with family on another continent.  I am also so eternally grateful for the decision he made to leave my Grandfather with Mary and Frank Capelli.

I want to send a huge Thank You to my extended Italian family who placed Anastasia’s name on an online family tree.  Without their help, I would not have been able research this important story in my family history.  Every piece of the story adds up to explain how so many decisions came to be.